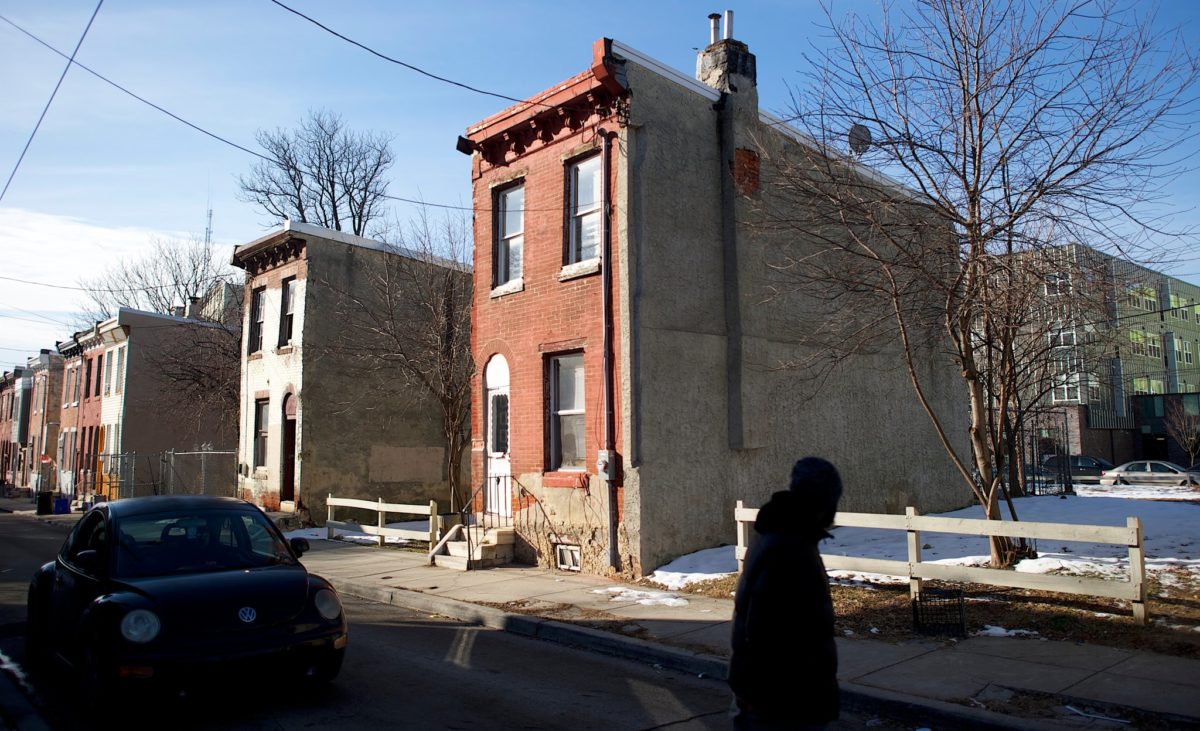 PHILADELPHIA — On a desolate North Philadelphia street, an isolated lock of five Victorian row houses is surrounded by vacant lots and a commuter rail line.

All but one of the two-story houses are vacant; burn marks outline boarded-up windows and a door on one building, and two display metal signs announcing they are up for property auction by the Philadelphia Housing Authority. The open rear entryway of one reveals a mess of bedding on a sheet of plywood, suggesting the derelict property does, in fact, have an occupant.

The houses, little more than a mile from downtown Philadelphia, are an estimated 40,000 vacant, derelict or underused buildings and lots — both publicly and privately owned — that are candidates for the city’s new Land Bank, an ambitious program that is the latest effort to clear up blighted neighborhoods.

Philadelphia, with a population of about 1.5 million, is the largest American city to adopt a land bank, experts said and could become a model for other cities like Detroit that have an even bigger problem with the vacant property.

While land banks have been around for several decades, including one in St. Louis that was set up in the 1970s, several dozens exist now, with newer versions emerging in places like Syracuse and Macon, Ga.

For example, in Flint, Mich., Saginaw Street has been transformed into a busy commercial and residential center after the local land bank’s acquisition of three buildings that had been vacant for as long as 30 years, said Frank Alexander, a professor of real estate law at Emory University and an author of land bank laws in many cities.

The street “bears almost no resemblance to what it was 15 years ago,” Mr. Alexander said. “The land bank was able, by addressing the worst properties, to accomplish the catalytic transformation.”

But not all land banks have succeeded. Critics are concerned about a provision in the ordinance creating the Philadelphia Land Bank that requires City Council approval for all sales, saying that could delay the disposal of properties and bog down redevelopment. An early land bank in Cleveland failed, for example, because it required legislators to sign off on all acquisitions and dispositions, Mr. Alexander said.

“If the City Council ends up delegating and deferring to the board of directors of the land bank, then it can move pretty well,” Mr. Alexander said. “But if it says ‘We want to hold hearings on every acquisition and disposition,’ then it will very quickly grind to a halt.”

And it takes time to assemble buildings and land that are attractive to developers, said Kelly Clarke, executive director of the Kalamazoo County Land Bank, in Kalamazoo, Mich.

“It’s not always about getting properties sold quickly,” said Ms. Clarke, who said her organization had sold about 50 homes, demolished 40 others and sold about 150 empty lots since it was established in 2009.

Rick Sauer, executive director of the Philadelphia Association of Community Development Corporations, which has helped lead the Land Bank initiative, said he believed it would offer developers a much easier process to navigate. Previously, developers sometimes walked away from potential projects if they had to acquire land or buildings from different city agencies with different requirements. Many of these vacant properties can be found on several agencies’ books.

The new city ordinance aims to consolidate ownership of the properties under the roof of the Land Bank. And to encourage developers to buy through one-stop shopping, the city ordinance also gives the Land Bank power to acquire title to privately owned vacant properties if they are delinquent in taxes. Officials said about three-quarters of Philadelphia’s vacant properties were privately owned and many were behind on taxes. That has deterred prospective buyers who have trouble tracking down owners of long-abandoned properties or dealing with liens on the buildings.

Once the Land Bank is operational later this year, developers will be in a better position to take control of whole blocks that currently show a “gap-tooth” patchwork of public and private buildings and land, proponents say.

“If all the properties are consolidated in one place with one application, one set of rules, one-time frame, that’s going to help a lot for the properties that are in the public inventory,” Mr. Sauer said.

The vast decaying stock of vacant properties also costs the city some $20 million a year in maintenance to attend to matters like cleaning lots or responding to fires, according to a 2010 study for the community development organization. The study also estimated that blighted properties had eroded the value of neighboring properties by $3.6 billion citywide.

Still, how rapidly the Land Bank’s appeal will translate into changes from block to block depends greatly on the health and strength of the city’s real estate market.

“What you can expect to see from this land bank is significant progress in the near term on the removal of the properties that are posting the liabilities, and then that begins to stimulate private reinvestment,” Mr. Alexander said.

The new organization will be able to sell properties below market value if they meet the law’s requirements for reuse, such as affordable housing or side lots for neighboring homes. And developers and real estate agents say the Philadelphia market is poised to benefit from the Land Bank.

Francis Vargas, vice president of the Elon Group, the development arm of the Altman Group, a real estate development and construction company, said both for-profit and non-profit developers were “excited” about the Land Bank because it would make it easier to acquire whole blocks of property for redevelopment.

Mr. Vargas said the new system was also designed to prevent speculators from buying up property and leaving it undeveloped in the hope of reselling when prices rise. “We don’t want the speculator community coming in and tying up land and not doing anything with it,” he said.

Mr. Vargas, who participates in a vacant property working group run by the Philadelphia Association of Community Development Corporations, said developers were not concerned by the centralization of vacant-property disposition under the Land Bank, a public entity whose board will be chosen by the mayor and the City Council.

“Most of us know how to work with the government,” he said. “I’m not hearing any worry on that.”

Alan Mallach, a senior fellow with the Center for Community Progress, a national organization that works to end urban blight, said the different interests that helped plan the Philadelphia Land Bank — including developers, builders, real estate professionals and community groups — so far appeared to be working together.

Putting elements of the Land Bank in place, such as the transfer of titles of publicly owned properties, will take the better part of this year. And its supporters say they believe the Land Bank has the potential to revive block after block of deteriorated properties.

“This is about creating a well-functioning land market,” Mr. Mallach said. “If you can create a process whereby properties can move into their control and they can effectively dispose of them in a responsible fashion, I think it could be extremely powerful.”