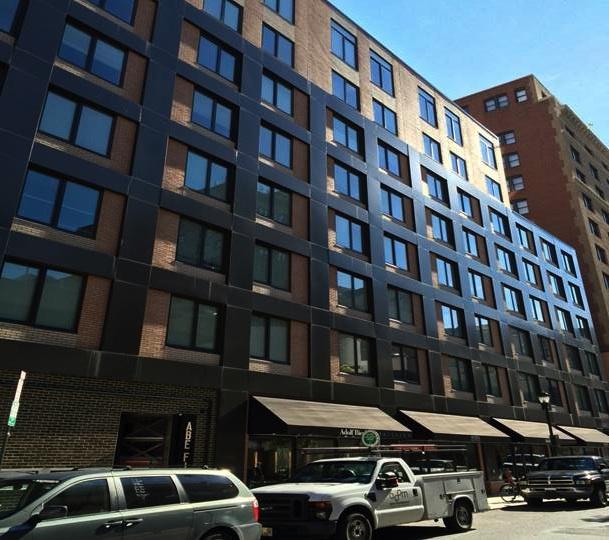 PHILADELPHIA – WEARING a Paul Green School of Rock T-shirt, his bangs plastered to his forehead in the summer heat, Laris Kreslins pulled in front of a handsome brownstone on Rittenhouse Square, the priciest neighborhood in the city, and hopped out of his car.

“We’re going to show you what a real Philly apartment looks like,” he said, unlocking the door to reveal a spacious one-bedroom flat sparsely decorated with CDs and copies of music magazines. “As you can see, it has hardwood floors, lots of light and very high ceilings,” he said. Then Mr. Kreslins paused and delivered what he knew would be the kicker: “Rent is $800 a month. Heat and electricity included.”

Mr. Kreslins isn’t selling real estate. He’s selling Philadelphia. The publisher of Arthur, a free arts and culture magazine, Mr. Kreslins, 30, lived in a tiny apartment in Williamsburg, Brooklyn, before leaving New York two years ago and ending up in Philadelphia, where he and his girlfriend, Kendra Gaeta, 30, another Brooklynite, bought a four-bedroom house close to the Philadelphia Museum of Art in March and promptly started a Web site, movetophilly.com.

The site, designed to lure 20- and 30-something singles and couples to the city, features a sultry caricature of Patti LaBelle, a longtime resident, who entreats visitors to e-mail for the kind of tour Mr. Kreslins was recently holding, taking visitors to a thrift store, a Polish butcher and his friend Brendan’s apartment.

Philadelphians occasionally refer to their city — somewhat deprecatingly — as the “sixth borough” of New York, and with almost 8,000 commuters making the 75-minute train ride between the cities each weekday, the label seems not far off the mark. But Mr. Kreslins and Ms. Gaeta are a new breed of Philadelphia-bound commuters, those who come from New York by train or the popular Chinatown bus for a weekend and then come back, with a U-Haul, to stay.

They are the first wave of what could be called Philadelphia’s Brooklynization.

Hard numbers assessing exactly how many new residents are from New York are not available, but real estate brokers are noting an influx of prospective buyers and renters from the city; club owners and restaurant employees have spotted newcomers, on both sides of the bar; and “everyone knows someone who’s moved here from New York,” said Paul Levy, the executive director of the Center City District, a business improvement group, and himself a former Brooklyn resident.

Attracted by a thriving arts and music scene here and a cost of living that is 37 percent lower than New York’s, according to city figures, a significant number of youngish artists, musicians, restaurateurs, and designers are leaving New York City and heading down the turnpike for the same reasons they once moved to Brooklyn from Manhattan.

On a recent Friday night Mr. Schmersal and his girlfriend, Toko Yasuda, were huddled at the bar at the Khyber, a smoky rock institution in the nightclub-heavy Old City neighborhood, a Colonial area of narrow streets bordering the Delaware River east of City Hall, to see Love as Laughter, a New York City band. “We like going to shows here,” Mr. Schmersal said. “In New York, there are so many people, it’s impossible to even get in to see hot bands.”

Much less be in a band. “For years I was willing to sacrifice quality of life for artistic fulfillment — you know, you find a circle of artists and you scrape by,” said Anna Neighbor, a 27-year-old bass player and Williamsburg exile, between sips of Yuengling lager at a bar in the Northern Liberties neighborhood, an artists’ enclave north of City Hall. In January Ms. Neighbor and her husband, Daniel Matz, and Jason McNeely, all members of the indie rock band Windsor for the Derby, decided to leave Brooklyn.

Ms. Neighbor and Mr. Matz discovered Fishtown, a gentrifying blue-collar neighborhood adjacent to Northern Liberties, where, in the last five years, youthful faces with bed head have made their way among the traditional Irish Catholic residents. They found a three-bedroom row house for $170,000.
<p class=”story-body-text story-content” data-para-count=”302″ data-total-count=”4596″>”New York is mythologically all about vibrancy and creativity, but it’s hard to work a 40-hour week and come home and be Jackson Pollock,” said Mr. Matz, 32, a guitarist. He said that by living in Philadelphia he could support himself teaching public school and devote the rest of his time to his band.</p>
A few blocks away from Ms. Neighbor’s house live Laura Watt, a 38-year-old painter, and her husband, Clark Thompson, 38, a financial services technician who left his Manhattan-based bank for one in Philadelphia a year ago. They settled in a three-level condominium in a new housing development called Rag Flats in Fishtown with their two children, Gus and Lydia. At $439,000 it was pricier than any of the block’s three-story row houses, but with three bedrooms, each with an outdoor deck; solar heat and electricity; a rooftop with spectacular views; and a dumbwaiter going down to the kitchen, they thought it was worth it.

“Philadelphia reminds me a lot of what Brooklyn used to be like,” said Ms. Watt, who had lived in Brooklyn and Westchester County for 15 years.

Fifteen or 20 years ago, the idea of Philadelphia as a place to go for quality life would have been laughable to many people, even to Philadelphians. Sandwiched between New York and Washington, Philadelphia was a flyover city — train over really — a place where a mayor had ordered the bombing of a neighborhood and where Eagles fans reveled in booing their own team, its chief popular exports cheese steaks, and “Rocky.” While Philadelphia’s rich cultural history, like its art museum, its symphony orchestra and its Colonial architecture, gave the city establishment credentials, it did not produce much of an avant-garde.

“The Philadelphia market was really provincial,” said Steven Lowy, who opened a gallery in Philadelphia in 1984 but fled back to Manhattan three years later.

Lately the city has stepped up its efforts to woo people back, in part by trying to position Center City as “young and hip and cool,” said Meryl Levitz, the president of the Greater Philadelphia Tourism and Marketing Corporation, who regularly holds lunches at which she tells the New York media, “We’re closer than the Hamptons!”

The campaign had a boost last month when Forbes magazine named Philadelphia No. 12 on its list of best cities for singles (out of 40), a jump from No. 15 a year ago. In 2004 tourists in Philadelphia numbered 25.5 million, an increase of 41 percent in the last five years, and though the city had been losing residents — especially young ones — steadily since the 1950’s, when it had 2.07 million people, the population of the city, the nation’s fifth-largest, has leveled off at 1.5 million in the last four years.

A government plan to provide the city with free wireless Internet access has as yet gone unrealized, but the national publicity surrounding it has given Philadelphia a progressive image, as has a marketing campaign by the tourism bureau, started in 2003 to attract gay tourists. That tagline was “Get your history straight and your nightlife gay.”

“There’s a big gay clientele coming down here,” said Michael McCann, a real estate agent with Prudential Fox and Roach, who also said he has seen a “significant increase” in buyers from Manhattan and has worked with “a ton” of “single people and couples between 28 and 43” from Brooklyn.

Often they move to start the kind of business they had in New York. Danuta Mieloch, 39, an owner of Rescue Rittenhouse Spa, who administered body scrubs to celebrities at Paul Labrecque on the Upper East Side before moving to Philadelphia to start her own place, is an example. Jose Garces, 33, a former chef at Chicama and Pipa in Gramercy Park, will open Amada, a tapas restaurant in Old City, in September. Matthew Izzo, 35, and his business partner, Mark Ax, 35, defected from New York design firms to start their own home and design boutiques, the Matthew Izzo shops.

“It’s just so much more workable here,” Mr. Izzo said. “It’s smaller and more manageable.” And Lindsay Berman, 27, who left a marketing job at the Showtime network in Manhattan, is waiting tables part time at Jones, a 70’s throwback diner in Center City, while she gets her T-shirt line, Dirty Old Shirt, off the ground.

Not that everyone is committed for life. Some “can’t give up their Brooklyn phone numbers,” said Heather Murphy Monteith, a dancer who runs a disco for toddlers. She has noticed 718 and 917 area codes popping up on the contact sheets.

Some keep more than just their digits: Mitzi Wong, 36, a buyer for the Philadelphia-based trend mecca Anthropologie, bought a “Jane Austen-like” row house in Society Hill, the historic Philadelphia neighborhood, but she is keeping her East Village apartment on weekends.

Lee Daniels, a native Philadelphian, and producer of the film “Monster’s Ball,” rents in Harlem but bought a luxury apartment on the Delaware riverfront. “So many people are moving here,” Mr. Daniels said. “People just fall in love with it.”</p>
<p class=”story-body-text story-content” data-para-count=”483″ data-total-count=”9745″>Many of the things that were once deterring about Philadelphia have also been turned around. The recent lifting of archaic building ordinances and a 10-year tax abatement on new construction means that blighted factories and brownstones are now being converted, many into luxury apartments and new buildings are going up in place of weed-filled lots. Bring-your-own restaurants, born out of Pennsylvania’s Puritan liquor restrictions, have become a charming hallmark of Center City.

Philadelphia still has its share of urban blight: It ranks higher than New York in homelessness, crime, and poverty. It maintains a high position in the Men’s Health list of America’s Fattest Cities each year, and, as New Yorkers often complain, you would be hard-pressed to find much open after 2 a.m. But the renaissance in real estate and restaurants has aligned with the city’s music scene, which runs the gamut of cool.

“Philly’s decidedly anti-scene, and that appeals to a lot of musicians that move there,” he said. “They can actually do their own thing.”

There are art shows of international renown, like the Salvador Dalí show at the Philadelphia Museum of Art in the spring, and shows by quirky collectives like Space 1026 in Chinatown, which recently housed an installation made with Cheez-Its. All of which has collided with a particular cultural moment in which uncool is the new cool, in which blue-collar scrappiness and a surfeit of fried-meat specialties now seems endearingly kitschy.</p>
At least one developer is banking on the hope that Philadelphia’s appeal is not just a fleeting fad. On a vast tract of land in Northern Liberties, an area once notable for hate crimes and heroin availability, a 50-year-old former shopping center developer named Bart Blatstein is building a $100 million development. Scheduled for completion in 2007, it will have 1,000 apartments, half a million square feet of ground-floor retail space and 100,000 square feet of industrial-chic office space, all of which Mr. Blatstein says will be offered at reduced rents to “edgy, creative types.” The project is seeking New Yorkers. (Mr. Blatstein’s company, Tower Properties, plans to advertise both in The Village Voice and on New York’s Craigslist.) “We want it to be a cross between Williamsburg and SoHo,” he said.

But Mr. Lowy, of Portico gallery in SoHo, is skeptical about the long-run chances for young artists: “The quality of life is pretty good but many of those artists probably won’t stay. Can you get an art dealer to come to your studio when you’re in Philly? Sure, you have time to make more art, but there’s no one to buy it.”

Correction: August 21, 2005, Sunday An article last Sunday about New York artists who are moving to Philadelphia for housing bargains misstated the location of an $800-a-month apartment in the Rittenhouse Square neighborhood. It is at 22nd and Spruce Streets, not on the square itself.